By Catriona May, University of Melbourne

Are you a saver or a spender? Would you choose a Big Mac over greens? Can you enjoy alcohol in moderation, or are you a binger?

As it turns out, there are common processes in the brain underpinning these seemingly disparate decisions. And if you are a spender, the way your neurons fire means you may be more impulsive in other areas of your life, too.

While financial decisions and health decisions may seem completely separate, the emerging field of decision neuroscience demonstrates otherwise. Using a combination of tools from neuroscience, economics, psychology and computer science, this new field is revealing much about how we make decisions; going to the very heart of what makes us human.

“There are some people who would say it is our actions that define us – what we do is who we are,” says University of Melbourne Decision Neuroscience Laboratory co-head, economist Dr Carsten Murawski. “And actions are the outcomes of decisions.”

Decisions like whether to buy that beautiful new bag, or save the money for a rainy day. Or whether to have a fatty burger or a salad for lunch.

Dr Murawski’s lab, which he runs together with psychologist Dr Stefan Bode, is an inter-disciplinary group of scientists that investigate decision-making at the level of the brain – locating which regions are involved in different types of decisions, and how. One of its recent studies tested the impulsivity of obese people, by assessing their financial decisions.

Working together with Dr Annette Horstmann, a biologist from the Max Planck Institute for Human Cognitive and Brain Sciences in Leipzig, Germany, Murawski, Bode and their colleagues asked a group of obese participants and a control group of healthy participants to make a series of financial decisions, which involved trading off immediate rewards with longer term gains.

“An example of the kinds of questions we asked is – would you rather have $20 today or $30 in one month? The trade-off is between the amount of waiting time and amount of money you get,” explains Dr Murawski.

The researchers asked participants to make around 100 such decisions. They found the obese group were more likely to opt for immediate rewards, implying a higher degree of impulsivity.

“This method allowed us to assign an impulsivity value to each person,” says Dr Bode. “We found that obese participants on average scored higher on the impulsivity scale than healthy participants.”

This finding suggests that similar brain processes might be involved in eating decisions and financial choices.

“We don’t yet know which brain processes are responsible for highly impulsive behaviour, but it appears that certain parts of the prefrontal cortex play an important role,” he explains.

The team then went on to consider the impact of environmental factors on impulsive behaviour, finding that exposure to images of food and positive social scenes influenced the obese group’s financial choices, but not the control group’s.

“Obese people were more susceptible to environmental cues,” explains Dr Murawski. “This was somewhat surprising to us at first, and it demonstrates that our decisions can be influenced by our environment in quite significant ways, sometimes outside our conscious awareness.”

The team are now taking these findings and applying them to food labelling, in collaboration with Professor Melanie Wakefield from the Cancer Council of Victoria. Together, they are considering how to design effective health warnings for unhealthy foods like high-sugar drinks, considered to be one of the causes of obesity.

“What should warning labels look like? Should we use images, text or both? Should they be positive or negative? They are the sorts of things we are considering,” says Dr Murawski.

Health warnings have been used in other areas of public health such as anti-smoking campaigns. However, researchers still don’t know which types of warnings are most effective when it comes to dietary choices.

“What is new about our approach is that we build on basic research in neuroscience and economics, and use methods like brain-imaging, to engineer effective health warnings, rather than only asking people what they think might be effective,” says Dr Bode. 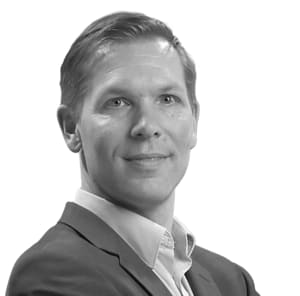 We can infer which brain regions are involved in a particular decision and what sort of computation they perform.

Dr Carsten Murawski, economist in the Department of Finance and co-head of the Decision Neuroscience Laboratory, University of Melbourne

Using imaging techniques like functional magnetic resonance imaging (FMRI) and electroencephalogram (EEG) means the team can analyse what is happening at a biophysical level in the brain when a decision is being made.

“We can infer which brain regions are involved in a particular decision and what sort of computation they perform,” says Dr Murawski. “So we start to see which regions of the brain perform computations related to risk, which ones related to value and so on.”

Food labelling may seem a long way from traditional economics, but part of the thrill of academic life for Murawski and Bode is bringing different disciplines together to solve common problems.

“When people started looking at the brain’s involvement in decision-making, around 10-15 years ago, all the different disciplines previously working on this area started coming together.

“Where psychologists and economists may have previously looked at the same decision from completely different perspectives, by working together we’re now learning that decisions across many different domains of life are much more closely related than we previously thought, because they involve common brain processes,” says Dr Murawski.

The lab is busy, with a wide range of research projects currently underway, all designed to shed more light on the still little-understood field of human decision making. These include a study on how people’s choices can shape their future preferences and another study on how we go about seeking information.

“If a discipline is too rigid it risks getting stuck and losing its impact,” says Dr Bode. “Innovation happens by combining existing pieces of knowledge to solve a problem you weren’t previously able to solve.”